I’ve never spoken to anyone 40 or fewer years old who even knows what a movie serial is. Sad, sad. With its roots deep in the silent film era, the movie serial was an adventure film shown in weekly installments of a bit less than 20 minutes each. The golden age of sound serials was the late 1930s to the early 1940s, when the usual serial was 12 to 15 weekly chapters long. On anyone’s 10 best serials list are classics like Buster Crabbe’s FLASH GORDON (Universal, 1936), ZORRO’S FIGHTING LEGION, DRUMS OF FU MANCHU, ADVENTURES OF CAPTAIN MARVEL, SPY SMASHER and THE MASKED MARVEL (Republic, 1939-43). Each chapter ended with the hero or his male or female sidekick in dire peril– a “cliffhanger.” In the next episode, the kids saw how the hero escaped, only to fall into yet another deadly trap 17 minutes later! And so on, for 12 to 15 weeks, 12 to 15 chapters, before the bad guys got their final comeuppance.

Serials deteriorated sharply in quality after WWII, and were impacted even more harshly by the rise of TV, in the period 1949-52. Of the 3 great producers of serial thrills, Republic, the king of serials, made its last serial in 1955. Columbia Pictures hung on until 1956, while Universal Studios bailed out at the end of WWII.

For its very existence, the serial depended on movie viewers habitually going to the same theater once every week, indefinitely. But by 1950, kids were finding they could stay home from the Saturday matinee, and watch chapters of the great 1940s serials on TV, for free, thus saving those dimes and quarters for comics and toys. Columbia Pictures’ solution to this problem was to make a movie serial which featured none other than the first great television hero, Captain Video himself! A 1951 release, CAPTAIN VIDEO featured Judd Holdren as Video and Larry Stewart as the Ranger (see featured image), in 15 chapters of interplanetary adventure. As on TV, the Captain had a bewildering variety of superscientific inventions, and he certainly needed them this time around, to thwart the evil plans of the Dictator of planet Atoma, the sinister Vultura (Gene Roth). But the serial’s budget seemed scarcely larger than the minuscule budget of its DuMont network inspiration, said to be around $10 – $20 per episode!

Whatever its defects, the serial did well enough for Columbia to try again, in 1953, with THE LOST PLANET, also starring Judd Holdren. But this time around he was reporter Rex Barrow, kidnapped from Earth to the planet Ergro by the evil Dr. Grood, who seemed to have inherited Captain Video’s complete arsenal of futuristic weapons. This way, Columbia didn’t have to pay royalties to DuMont.

More evidence that Columbia’s CAPTAIN VIDEO serial must have found some audience is that arch-rival Republic Studios gradually evolved their own Captain Video clone. He was known as Commando Cody, a name which puzzled even very small children, who knew quite well that “Commando” wasn’t a military rank.

The Republic scriptwriters were clearly ordered to imitate “Commander Corry,” in hopes the kids would think they were going to see a movie version of SPACE PATROL. While Buzz Corry was often introduced as Commander-in-chief of the Space Patrol, we were told that Commando Cody held the exalted rank of “Sky-Marshal of the Universe.”

It’s not recorded that any kid was fooled, and in his first outing, Commando Cody created no sparks at all. As played by the stolid George Wallace, he seemed to be a civilian researcher (making his rank all the more inexplicable— some of us kids speculated that “Commando” must be his first name) who had somehow inherited Republic’s old Rocket Man flying suit (from 1949’s KING OF THE ROCKET MEN). 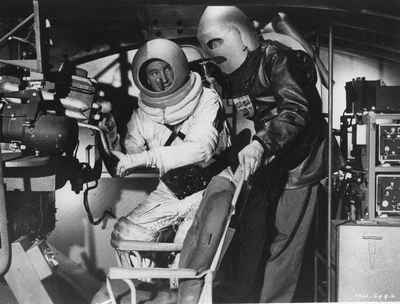 Radar Men from the Moon

Anyhow, in RADAR MEN FROM THE MOON (12 chapters, 1952), Cody used the flying suit and a Flash-Gordon-style space ship and much stock footage from far better, earlier serials, to thwart the never-clear but invariably sinister plans of the evil Retik (Roy Barcroft), Dictator of the Moon. Despite a nifty tank probably suggested by those appearing in 1936’s UNDERSEA KINGDOM and 1937’s TIM TYLER’S LUCK — the last starring future Space Cadet Frankie Thomas!— Cody’s adventures constitute one of the most boring serials made up to that date.

In his second outing and incarnation, the Commando Cody character was confusingly called Larry Martin instead, and was portrayed by Captain Video himself, uh, that is, by Judd Holdren. In ZOMBIES OF THE STRATOSPHERE (12 chapters, 1952), still apparently employed by the same research lab, he faced an invasion from Mars, led by Marex (Lane Bradford) and Narab (Leonard Nimoy!). Again the old rocket suit and much stock footage made up most of the viewing time.

In case kids were not already confused enough, the final Republic effort along these lines was simply called COMMANDO CODY (1953) and was released to theaters in 1953 as a 12-episode serial; it was later broadcast on NBC in 1955 as a 12-part summer replacement TV series, making it serve double duty as not only the last and least Republic Rocketman serial, but also the last and least of the classic 1950s space adventure TV programs. 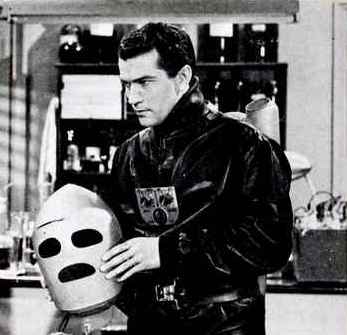 Cody was now Judd Holdren, or Judd Holdren was now called Cody, and Holdren surely must have been viewed by desperate producers as the Buster Crabbe of these latter days. Anyway, Holdren or Video or Cody or whatever his name was now had it all… a secret mountain, uh, cave retreat, as well as a strange uniform (somewhat like that of a 1940s department store elevator operator) and even a mask, like the Lone Ranger’s.

More important, he still had the use of a pretty nice space ship, needing the rocket suit only for short jaunts and chasing down bad guys who were escaping on foot, horseback or by car. The chief bad guy this time around was known only as the Ruler (Gregory Gay), whose aim was to try to conquer the Earth by the use of extensive stock footage from dozens of other, earlier, far superior Republic serials. One odd, and probably fatal, feature of this release was a lack of cliffhangers. Each episode was more or less complete in itself.

Having tried everything, the serials then gave up the ghost, but fans of the 1950s TV space hero series should certainly have a look at these films that were so heavily, and unsuccessfully, imitative of the wildly successful Golden Age space travel live TV series.

One thing about the Republic serials that bothered even very young children was that the various rocket ships somehow flew in the Earth’s atmosphere all the way to the Moon, Mars or whatever, leaving a vapor trail as they did so. And while the characters might or might not wear space suits on the Moon, the lunar sky was identical to the Earth’s sky. Air locks were unknown. The kids knew better. Hadn’t they all seen DESTINATION MOON a couple of years ago? And Commander Corry and Tom Corbett went to the moon fairly regularly, and what they saw and endured corresponded quite well with DESTINATION MOON. How the serial makers thought they could do outer space adventures, without ever having outer space put in an appearance, is another one of those insoluble mysteries.